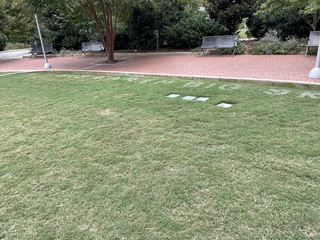 I had reconciled myself to selling it and even toyed with the notion of donating. But damn… it's just not something that sells. Too big, too pricey, too, well, nice. And, this place we moved to -- it's perfect in just about every way --- except for the "piano question."

Now, we've decided on a rejiggering of things in this new (old) and smaller (thankfully) place. Originally, Henry was going to have his guitars and equipment in the finished basement downstairs. And, we up-fitted the detached one-car garage to be his office/study. Then, in December, he had a change of heart. And, I'm really glad.

Billy put in a new floor and painted in the downstairs office. With a bathroom right there AND the fact that Ginny the cat can be his study buddy again, I think Henry's happy with the rearrangement.

The garage room already looks like a great music space, even though it's all messy at the moment. The piano looks fabulous. I predict it will be very inspirational for us both. And, it won't be a bad place to visit either, with musical friends. Think I'll get my flute out in the next couple of days, too... Read More
5 Comments

I am so glad you're keeping the piano and making a music room in your home. A place to create and feel all the excitement of life through the magic of music.

Well, having visited the lovely room with the cork floor, I like this idea a lot. Any chance there's room to have classes/readings/small groups to play and sing in there? How big is that piano?

So glad the piano is home again! Can't wait to see the studio. I might even dust off my dulcimer and fiddle and actually learn to play the durn things. Then we can rock and roll!

Welcome home! It is too beautiful and too much a part of the family to have to let it go after all these years.
Bet Ginny is glad to get her study buddy back too.