Here we are, it's October already...

What I worried about when I moved back here was... 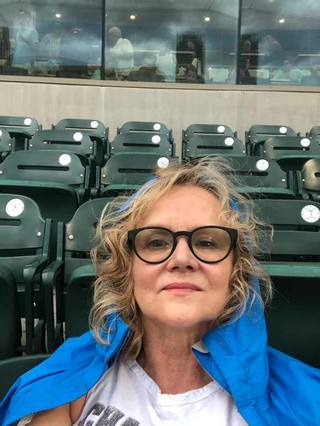 ...the heat here in Charlotte. It keeps me indoors way more than I would like. After last summer's imposed isolation, somehow, I forgot how damned hot it gets in this town. And humid. Let's not forget the humidity.

Somehow, though, I am able to power through this muggy-ass season when I've got baseball games to look forward to and a ballpark in which to hang around. Last night Henry was busy with triplet grandparenting and our plan was to meet at Truist Field for the Knights game. When I got there, I texted him to let him know we were in game delay, so not to hurry. "You're already there?" he asked. Well, yeah. I went over there early, setting out to walk the few blocks around six. Because I could. I like it there. Hanging out at the ballpark is my idea of a really good time.

It did start sprinkling, and most of the fans left their seats for the covered concourse. Not me. That's what raincoats are for. I sat back and watched the sky, the ballpark with all its support people doing their jobs, the players popping in and out of the dugout, impatient for their evening's shift work to begin. I'm not much for selfies, but here's one I took last night. Can you tell I like being there?