No, Wait, the Summer Can't Be Over Already!!!

Back from El Salvador 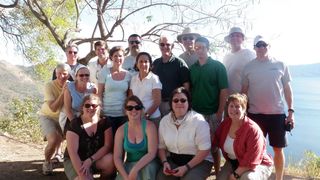 I made it back from the Habitat building trip to El Salvador very early on Monday morning, about 1:00 a.m. It was a great trip. Believe it or not, no whiners! Good folks all, including especially the masons and the homeowner families. No one got hurt. And, we accomplished quite a lot on the two homes we worked on.

I had a momentary panic attack when I found out that one of the team members was a Lutheran pastor. Shit. How was that going to work? Would I have to clean up my language, I mean, overly? Were we going to have to get all Jesus? I well understand that Habitat for Humanity is a Christian organization, but I've never had difficulty fitting into the program, even when I worked there years ago. My experience has always been that they DO a lot, and TALK not so much, which is how I like it. But, it worked out fine. The Pastor's name is Chris. (How ironic is that?) He's actually a very funny guy and not in the least officious or barfy-pious. I would even go to his church if I lived in Charlotte.

And, the age span in our group was huge - late teens to late 60s I'd say, and that makes it all the more interesting. We also had a decent contingent who were repeat offenders -- folks who, like me, had been on this trip before. That's a big help, too, takes some of the burden of explaining stuff off of the group leader, Beth.

The weather was, as expected, sunny and hot. But, we had a stiff breeze on Monday that lingered through Wednesday. I'm sure I've got grit in my skin that won't be out until I get professional help for it at the spa tomorrow. Thursday it was well and truly hot, but a bit of the breeze returned Friday. The resort on Saturday was a welcome respite and this time the surf conditions were mild enough so that we were able to swim in the Pacific Ocean.

But, back to the spa. That's where I get to go now - the spa. Seems kind of crazy to be working in a third world country where people have jack, and I get to come home and go to a spa. How does that work out anyway? It's the sort of thing you think about a lot when you're on a trip like this. I didn't come up with any answers.

Click on the Photo Essays tab above to see pictures from this trip.

Gotta love Chris. I can think of few people I have met who have not changed in 30 years -- that's how long we have known each other. You tell it like it is and always have. I can remember a petite, attractive, young blond woman whose choice of words would have made Rahm Emanuel blush -- that's still the case.
Thanks for the report on your trip.

Yup. Blush and laugh! Thanks for the report on El Salvadore -- but tell us about the spa experience too!

About that other Chris, your new-found Lutheren pal. I don't know the guy, but maybe it'll do you some good to rub elbows w/ a little piety. I mean, your natural habitat is a world of (impro)piety, right?
Do you really plan to behave at Wildacres?

Jimmy Carter spoke the truth when he got excoriated for saying "Life is not fair." I'm aware of that every day here on the reservation. It's not so much the material goods: there's a safety net if people will use it wisely. What I've come to value most is what my parents gave me: safety, high expectations, education, ingenuity, rich experiences, solid values...the intangibles that make all the difference. With those things, we can make the material happen.

Like you, I had occasional bumps with evangelical Christianity at Habitat, but the attitude of rolling up the sleeves, getting down in the dirt, and creating inspiration was unsurpassed by any other organization I ever got involved with. Rest in peace, Millard Fuller. Wherever you are is a joyful place.

I really hate missing the El Salvador trips, but the body ain't up to it, and I'm not one one for standing around in the heat. It's hard to believe it's over 20 years since we built that first women's house in Charlotte. Some said we couldn't get the job done, but YES WE DID! I'm no end of proud to see the tradition carrying on, and glad to see Beth still leading the pack.

next time you go i wanna go too! i don't have many gal friends i can sling the f-word around with!

Mikey, I will take your comments as compliments for sure. I don't think I ever made Rahm blush...maybe gave him a few pointers?
Diana: OK, put February 2012 on your calendar!
Sam: no doubt the "other" Chris would agree with you. I WILL behave at Wildacres, no drunken dirty-word scrabble, well, maybe just dirty-word scrabble...

Great work Chris.Glad you had a safe and productive trip.I am sure you were nominated as the group comedian!

No way, Grace. I was only among a pack of very funny people!

Way cool, 'Iss! I am proud of you for doing this again, and happy that you took care of yourself afterwards! Can't wait to see you!

Hey Chrissie, just sent your blog on to a friend who might want to go with us next year-MOJ-come on, there is plenty you can do sitting down! Thank you so much Chrissie for the baby jesus's-can't wait to take them to Alex's Sunday School class on Sunday-ha ha ha