Here we are, it's October already...

No Joy in Mudville 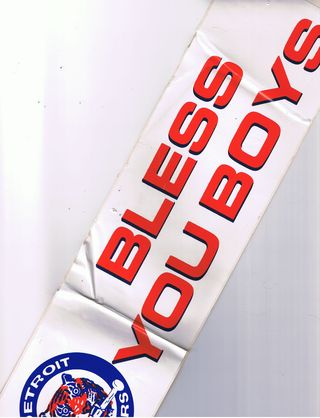 My 1984 World Series bumper sticker.
Well, the Mighty Casey did not strike out last night. In fact, Miggy hit two home runs, one a tremendous blast that might well have trailed a banner behind it saying "Screw This." It wasn't enough, not nearly enough.

My Detroit Tigers took a brutal beating last night to end all dreams of going to the World Series in 2011. I won't go into all of the brutal play-by-play, a 15-5 score tells that sad tale. Suffice it to say that mistakes were made, mostly by players. A couple of bad calls by umpires only added insult to self-inflicted injury. In short, it was a total Murphy's Law game. Everything that could go wrong did. Even with Miggy's two home runs.

I have been trying to figure out this morning which hurts more -- getting the absolute shit beat out of you, or losing in a nail-biter? I'm thinking the nail-biter would be better. It lacks the humiliation factor. I kept thinking about how truly awful it must have felt to be a Tiger on the plane going home last night.

Additionally, while not a very sporting sentiment on my part, I have to admit that I hated getting beat by the Rangers. As far as I can see, the only thing good about Texas is Lyle Lovett. You can keep the rest. And knowing that W was there cheering for the Rangers (which, during his tenure with the club, he about ran into the ground) made it suck just that little hurtful bit more. The only bright spot about the Rangers is their manager. Washington surely does have a good time at games; you can see why his players want to perform for him. But all in all, I'm hoping they get their asses handed to them in the World Series.

So today I will retire my Tiger souvenirs for another year. I'll put away the pennants and the button and the cartoons and the ears from the 1984 World Series. Maybe I can talk Henry into going down to Florida for Spring Training in March...
11 Comments

But it was a good run!

Better to take a beating. Losing in a nail biter just means that EVERYONE from sportscasters to players for your team and other teams will second guess the loss for years to come -- every pitch, swing, hit, run, error, and call.

I think you are right, Mikey. Jim Leyland said something of the same thing last night.

Definitely, nail-biter finish is better. Great story, Chris. Thanks so much again for Word Keepers. Pierrette

I thought of sending a sympathy card. Other than Lyle, Texas holds my 2 wonderful aunts. It is sad that they have to live in the same state as W.

Blowout or nail-biter, my screams are just as painful as is the headache that follows.

I feel your pain, Chris, as your beloved Tigers were the guys that beat my long-beloved Yankees (Please keep your boos to a minimum. Thank you.), allowing your boys to let the evil Bush-Rangers beat hell out of them. I think losing a nail biter is much better in the long run; there's something about your favorite team being slaughtered that is so abysmal and horrid, the pain seems deeper (at least in my humble opinion). Yes, even Yanks fans know that pain, too -- 1976 or 2001 anyone? And the 1960 7th-game, 9th-inning loss to the Pirates is still one of the biggest traumas I've gone through (hey, I was 10, give me a break). Anyhow, here's hoping the Tigers and the Team Everyone Loves To Hate can make it back to the playoffs again next year. Now, if the Panthers could win a game . . . .

I'm inclined to agree that, if you have to lose, a nail-biter beats an ass whupping. With an ass whupping, there's the obvious embarrassment but also, to use your words, the "screw this" notion that they in some way they just quit on the game and their fans.

Generally with you on TX though I might expand positives to include Austin City Limits (and not just when Lyle is on). As entertaining as Washington is the W factor can not be overcome - and you know his mug is going to be all over the World Series.

For this year, I think I am now a Brewers fan. St Louis has the coach of roids (McGwire - whom i still think is a chump and a fraud) so here's to the Brew Crew, if I even watch.

Wear your Tiger cap loud and proud. My Red Sox cap has brought more comments and fun chats in the last few weeks. There is ALWAYS next year!

A side note to Henry - say yes to Spring training.

Edson, I meant that Miggy was saying "eat this Rangers" rather than giving up - like he wanted to make sure they remembered he was the batting champion this year, pennant series notwithstanding. There IS always next year, and I will always wear my Tiger hat. My new jersey, with the Sparky patch on the sleeve, will never be out of style either.
Both would look damn good at spring training for sure!

And Little Johnny, it could be worse, you could be an obnoxious Braves fan sporting a Chipper Jones jersey...now that would be intolerable!

I much prefer crushing losses to "losing in a nail-biter." Nail-biters bring guilt and recriminations: there's always some little thing somebody could or should have done that might have changed the outcome. Some person (me?) might actually be responsible. With crushing losses, there's certain knowledge that it was a bad day all around, everybody screwed up, and that, on that day, the other guys were a lot better. No individual guilt or blame is necessary. Also, there's nowhere to go but up.

P.S. Texas has wide open spaces and armadillos, nasty smelling close up, but not nearly as offensive or damaging as W.

First, this year, I think only Missy's opinion counts.

Having rooted first for the Rays and then of course for the Central Division Tigers (who I would have heavily favored to beat the Rays), I am dismayed that we have to suffer Bush the Lesser's countenance further. I am even overly tired of Nolan Ryan's hardware store ad. The only silver lining is that with no East or West coast teams, the advertisers are going to get killed. Hopefully, they will in turn demand rebates from the network. A pox on Fox and all its co-conspirators.

I will give you my personal answer to your question for the narrow case of 'win or go home' games.

The drubbing is profoundly humiliating. Surfeit of homers notwithstanding, this was a very hard game to watch. Toni called me from CA during the 7th or 8th inning and I confessed that I could not turn away from the blowout. (She had already surrendered, having seen the failed President one too many times, and drifted elsewhere among the airwaves.) I likened the game to watching a trainwreck; I knew it was truly gruesome, but I was compelled to focus on the continuing carnage.

In contrast, a nail-biter maintains fan interest. True fans hang on every pitch and consider the myriad consequences of every potential small move...secondary leads, pitcher-batter match-ups and so on. You also know you can win at any moment til the last out. In the land of shoulda, coulda, woulda, you imagine the ball drifting foul, or your reliever getting the key strikeout. So, though it is still the agony of da feet, as you and your team slog dejectedly home... inevitably you allow yourself at least the faintest initial glimmer of "wait'll next year".

QED: I find suffering the final game blow out more devastating. Bot ways you get the blues, bad! But the nail-biter refrain is love eluding you, the one that got away and left you, "...lost in a room in Juarez", -- it's tequila, from the bottle, no ice. The blowout is nasty, the bitch who stole your truck and then ran you down with it --this is, fuck it, I'm out of gin I might as well start drinking brown liquor.

Been down so long it looks like up to me,*